It’s the end of 2019. The U.S. economy is going strong, unemployment is at a 50-year low, the household net worth is up 58% over a 10-year period and African American and Hispanic American unemployment is at the lowest level on record. Some at the time predicted that these economic indicators would propel President Trump to re-election in 2020 despite seemingly constant controversies surrounding him and his administration in the mainstream media. No one could have predicted the 2020 global pandemic or the resulting economic fallout that undoubtedly impacted the presidential election and sent Trump out of office. The events we don’t predict can sometimes have the greatest impact on political outcomes, but that hasn’t stopped some people from already starting to make their 2024 presidential election predictions.

The political prediction market PredictIt, where people can put real money into the “stock market for politics” and trade on their predictions on political outcomes, shows one possible 2024 surprise. The incumbent president almost always wins the support of their party for a second term. But PredictIt traders have Vice President Kamala Harris winning the Democratic nomination for president next cycle. 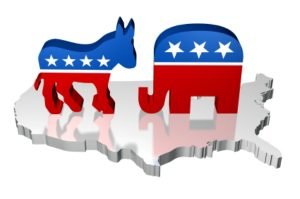 Other talked-about Democrats with a potential for 2024 include Biden’s now Secretary of Transportation, Pete Buttigieg, New York Rep. Alexandria Oxasio-Cortez (D) and former presidential candidate and Vermont Senator Bernie Sanders. But those are all unlikely and not receiving much attention on prediction markets.

The Republican Party, on the other hand, is very much up in the air. Former President Trump continues to make it clear that he is committed to a strong presence in the Republican Party for the foreseeable future, while other segments of the GOP have gone as far as to consider forming a new party to get out from under Trump’s leadership. The PredictIt market still reflects Trump’s lead as the Republican nominee, but other potential candidates like former Vice President Mike Pence, former UN Ambassador Nikki Haley and Florida Governor Ron DeSantis are also receiving a lot of attention as possible picks depending on what direction the Republican Party takes over the next few years. 2024 presidential election predictions continue to be a popular topic, but the only thing we can expect between now and then is that something unexpected could shift the entire political landscape.