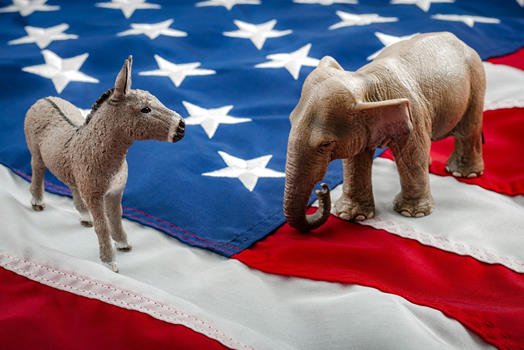 Democrats in Washington see the 2022 midterm elections as a chance to expand their razor-thin majorities in the House and Senate. Republicans see them as a chance to take back control. How each party handles coming partisan legislation battles could play a large part in determining how the 2022 midterms play out, and both parties will try to use them to their advantage.

It is historically probable that the party who holds the White House will lose support during midterm elections. According to Gallup, when a president’s job approval is above 50%, his party historically loses an average of 14 House seats, and if his approval is below 50%, the average loss is 37. Gallup determined in 2018 that, overall, the basic relationship between presidential job approval and midterm U.S. House seat loss has a statistical correlation of 66%.

If you apply this to the Democrat’s slim majority in the House, it’s understandable that Republicans feel hopeful about their chances to take control of the lower chamber in the 2022 midterms. Political betting site PredictIt’s market on which party will win the House in 2022 has had Republicans consistently ahead. Over in the Senate, it’s a little more nuanced. A handful of Republicans have already announced they will not run for re–election in 2022, which opens up some potentially competitive seats for Democrats. Still, it’s rare for a president’s party to gain seats in the Senate during a midterm election. PredictIt traders think Democrats will be able to keep control of the Senate.

Democrats got their first major win in the $1.9 trillion COVID relief and stimulus bill, which was a triumph of Democratic unity, but ultimately passed without the support of a single Republican. Some of its contents – like funding to speed up vaccine delivery, and thousands of dollars in many families’ pockets – is extremely popular with voters. You can be sure that Democrats will be using its popularity through the midterms, but in political time that is still eons away and voters tend to have short-term memory about these things. Republicans are counting on it.

Coming off the high of this win, some Democrats are arguing for a rule change in the Senate to make it easier to pass legislation with a simple majority, rather than the time and (likely unsuccessful) effort it would take to reach a bipartisan consensus of 60 votes on priority liberal agenda items. Any effort to reach that number would mean diluting their goals at a time when they have the ruling majorities to be able to push their biggest policy changes, argue Democrats. It could also be politically advantageous for Democrats to put more liberal versions of bills on issues like immigration, infrastructure spending, voting reform and gun control in order to force a vote and then use the Republican opposition to tee up ads in the midterms that paint them as anti-woman, anti-immigrant, etc., and unwilling to compromise. Republicans, for their part, will use the same votes to paint Democrats as extremists and overreaching in their agenda.

“At some point in time, the tide will turn against them,” said Doug Andres, press secretary for Senate Minority Leader Mitch McConnell (R-KY). “What’s really going to hurt Democrats is wild spending and policies that are just out of step with most Americans. It’s classic Democratic overreach.”

Some moderate Democrats are warning other factions of their party about pursuing this tactic and urging more bipartisan compromise that they believe will lead to better results as well as help avoid a shift of control in the midterms, especially as Congress moves on to more contentious issues where getting every Democrat on board will be more difficult. But the liberal wing of the party, who was skeptical of Biden throughout his campaign, is delighted by how he’s pursuing his agenda so far. “It is absolutely a bold and transformative and progressive agenda. Where candidate Joe Biden started is different from where President Joe Biden started,” said Rep. Pramila Jayapal (D-WA), chair of the Congressional Progressive Caucus.

Learn more about the 2022 midterms elections on Predictit.org

will newsom be recalled?